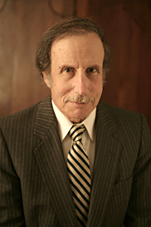 We are excited to announce that top-rated trial and appeals attorney, David S. Gould, Esq. has become Of-Counsel to our firm. In this capacity, David will be trying selected cases with our trial team.

David S. Gould has the extraordinary accomplishment of graduating with honors from Princeton University and Harvard Law School. In his career, David has litigated all types of personal injury and wrongful death cases with extraordinary success. He has won more than 90 percent of cases that have gone to jury verdict, and has had only one liability verdict reversed.

He is an AV® rated attorney by Martindale-Hubbell, the highest such rating available to any lawyer. David has tried and won hundreds of cases, including the first suicide-bomber airline disaster and various other high-profile matters. While a federal prosecutor, he handled cases ranging from widespread fraud in federal housing mortgages to a sensitive case involving CIA and FBI counter intelligence.

From 1986 to 1992 David served as Special Consultant to Sol Wachtler, former Chief Judge of the New York State Court of Appeals, and from 1989-1994 was Chairman of the NY State Courts Ethics Commission. He was also the only private sector representative to help institute the Individual Assignment System – an overhaul of the structure and function of the New York state court system.

David has been a member of the New York State Trial Lawyer’s Association for thirty years. He is a published author and has often been noted in both local and national media.

Additional information, including some of David’s top verdicts can be viewed at www.davidgouldlawyer.com